From Ron Ringsrud's Emerald News, check out how these labs want to grade colored stones, and since this is most of his newsletter in one post you'll find other stories too, such as what's happening with the Muzo miners, and the award the Muzo companies got from the JNA, which is inserted like a commercial in between two parts of the story on the labs.

I love Ron's newsletters, and thank him for allowing me to repost them here.

Recently two prestigious companies have come out with new systems of judging and rating colored stones and gem mineral specimens.

The Gubelin Laboratory has announced a new system that recognizes the large number of new people looking to purchase colored stones. The rating system, currently available only in Gubelin's Swiss location in Lucerne, attempts to simplify colored stones in the same way that the GIA Diamond Grading System simplified diamond grading.

The most important factor is quality, rating visual aspects like color, clarity/transparency and cut. Rarity evaluates the type of gemstone, its weight and any treatments used to enhance the gemstone. Last, salience describes the uniqueness of the gem and its ability to stand out. Experts at the lab will use these parameters to calculate a point value to communicate the beauty and rarity of a stone in one single number. Raphael Gübelin, president of the House of Gübelin, explained: “The more you know about coloured gems, the more you value them."

Curmudgeonly note: Salience is a word we don’t use that much - - - here are some synonyns for Salience: importance, celebrity, fame, eminence, greatness, prestige and renown. Salience is a good word - - - While a two carat emerald with no clarity enhancement is rare, it is not very salient because at that small size there are many of them compared to the very few unenhanced emeralds above five or ten carats! A ten carat emerald with no enhancement, good cutting and color - - is one Salient emerald!

Now, for those of you who don’t see the word curmudgeon very much I will share synonyms - - crank, grump, killjoy, crab and faultfinder. Hmmm, sometimes the editor of Emerald News can be a real curmudgeon, tsk tsk !

Wilensky Gallery in New York has long been an innovator in the mineral specimen world. Their " Wilensky Approach" to grading a specimen looks at two things: the quality, color, transparency, form and luster of the mineral crystal itself, and then, the relationship of that crystal to the matrix it is on. Attention is given to Balance, Aesthetics, Contrast and Perfection. Finally, SIZE is of great importance in considering the rarity and perfection. 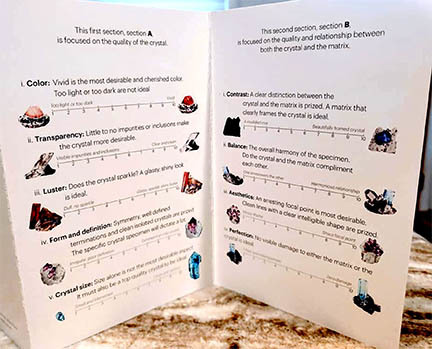 The Wilensky website gives more detail, as well as the brochure being created at the Gallery location in Manhattan: 173 Tenth Avenue, New York.

The Muzo Companies have been honored in the JNA awards held in Hong Kong in the categories of Sustainability and Innovation. They ran against big companies/groups such as De Beers, BOJEM (China), Shineshilpi (india) and the Phu Nhuan Jewelry Stock Vietnam.

What, and Who is JNA?

JNA, or Jewelry Net Asia is a media company putting out the ubiquitous JNA magazine along with four other magazines: Gems, SilverStyles, Pearl, and Thailand Special. JNA Awards is organised by Informa Markets, and recognises and promotes companies that demonstrate leadership, innovation, and socially responsible strategies. The awards programme was supported by Chow Tai Fook Jewellery Group Limited, Shanghai Diamond Exchange, and Bahrain Institute for Pearls and Gemstones, the KGK Group and Guangdong Land (Shenzhen) Limited.

The last Emerald News article applauded the wording of their lab certificate addendum concerning emerald fissures that, though empty at the time of testing, could be filled at a later date. The SSEF press release was worded in a way that respected the honest dealers. But the innovation to add the words, “at the time of testing” to the degree of clarity enhancement line on the certificates was done years before by Gubeliin and AGL.

Here is the wording on the Gubelin certificate: “ Untreated Emeralds

* By filling the fissures and fractures with a foreign substance such as oil, resin or wax, the transparency of the emerald can be enhanced. Such a a clarity enhancement process is usually reversable and repeatable at any time. At the time of the analysis, the emerald described in the above Gubelin Gem Lab Report did not show any indications of clarity enhancement “

Errors Creep in to Emerald News Just Before Deadline

In the last issue, a mention was made about a lab that published an industry-wide bulletin about irradiated emeralds. I would like to publicly apologise for using the word “rude” in characterizing the way that the bulletin was made. It was not rude; the information was sent out with good intentions. While the timing was insensitive I’m sure it was done without considering that Tucson was coming up soon thereafter. So in the last Emerald News it was me, not anyone else, that was rude. Sorry.

Several colored stones dealers in the US who deal in emeralds, mainly Colombian emeralds, have agreed that AGL and SSEF occupy the #1 spot in preference for emerald certificates, based on reliability and accuracy. Gubelin Lab is in #2 spot in the US but shares #1 with SSEF in Europe, according to emerald dealers interviewed. Los Angeles based emerald dealer Gabriel Acuña stated that between AGL and SSEF there is decent accuracy with the emerald certs. He usually finds them in agreement when a stone is sent to both laboratories. AGL edges out SSEF in the USA, simply for the convenience of AGL's NY Laboratory, located in 580 5th Avenue. For example, Tiffany, ten blocks away, uses AGL for almost all of its stone certs. The above informaton, however, can change when a private client, perhaps from Europe, states that he or she will not buy the stone unless it has a GGTL cert, Gubelin, or some other lab. This has happened to me, after all, “the customer is always right!”

Guaqueros Getting Unruly in the Muzo Mining Region

LIke any industry, it is the workers at ground-level who suffer the most in a pandemic. In the emerald mining region of eastern Boyacá, many miners have been laid off and others have had their hours reduced. Because it is a remote and poor region there is suffering. Also, the large mining companies have less money to dedicate to their Corporate Social Responsibility programs. All of this adds up to an increase of tension in the region as unemployment increases and the pandemic wears on.

President of the Colombian Emerald Exporters Association (ACODES) Guillermo Galvis as well as Oscar Baquero of Fedesmeraldas report on the current situation of the pandemic. The remoteness of the region helped to reduce the spread of the coronavirus and after the first three months or shut-down, emerald mining resumed in the region with Muzo, Santa Rosa (also known as Cunas) and Coscuez reporting returning to operations.

Besides the employed workers, there are independent artisinal miners, called 'guaqueros' (lately they are categorized by the Ministry of Mines as 'Barequeros' which means the same thing except that it sounds more bureaucratic ) who dig for emeralds in the stream beds and in prospecting trenches and have no income except for selling the few emeralds that they find. They have been protesting. In Pena Blanca, Coscuez and Muzo they have formed associations in order to stop being invisible to the state and to the mine owners. ASOBARECOL is one organiztion and Confedesmeraldas is another and the miners are being encouraged to register with the state as 'Barequeros' and thereby gain legal license to sell what they find. The locals are registering so as to counter the diminishing size of the small local emerald markets like El Chacaro at Coscuez, La Playa in Muzo and Palomas at Chivor as well as the historic 50-year run of esmeralderos selling goods once a week at the Plaza Julio Flórez in Chiquinquirá.

The Emerald National Fund has approved important resources for the region and communities at September. They approved the equivalent of about 300,000 US dollars for the local 'barequero' miners, the local health facilities in the towns, and a small amount to support the Hospital of Chiquinquira. These resources have beeen given to the communities in the past months.

The Emerald National fund had the lowest ever income for 2020, since exports in the months of April to July been close to zero. However the organization had the wisdom to have emergency “Savings for a Rainy Day” and sent out the assistance.

Here's wishing you a peaceful and healthy New Year!!