No Buyer for 3ct. Blue Diamond at Sotheby’s

No Buyer for 3ct. Blue Diamond at Sotheby’s

Oddly enough, this lovely blue diamond failed to sell, but some of the other items did exceptionally well, one in particular garnering more than twice the estimated sale price. 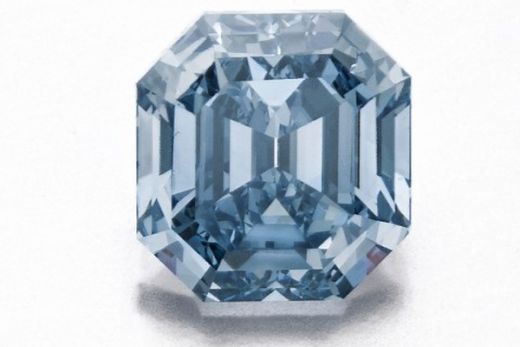 "RAPAPORT... A 3.01-carat, fancy-vivid-blue diamond ring carrying a high estimate of $6.3 million was among a number of headline items that failed to find buyers at Sotheby’s Geneva auction.

Sotheby’s withdrew the stone from Tuesday’s Magnificent Jewels and Noble Jewels Part II at the request of the consigner, it told Rapaport News Wednesday. The sale, which achieved a total of $12.4 million, was the auction house’s first live event since the onset of the coronavirus pandemic, and followed Part I, which took place online.

An oval-shaped, 21.56-carat, D-color, VVS1-clarity diamond ring by Lorraine Schwartz, valued at $1.5 million to $2 million, also went unsold. Other colored diamonds were not purchased, including a duet ring set with a pear-shaped, 3.03-carat, fancy-intense-blue diamond and a pear-shaped, 2.82-carat, D-color, VVS1-clarity diamond, as well as a step-cut, fancy-vivid-yellow diamond ring weighing 16.43 carats.

Meanwhile, the top-selling lot at the sale was a marquise-shaped, 7-carat, fancy-intense-pink diamond ring, which was auctioned for the first time after spending 30 years in a private collection. The piece sold for $2.8 million, within its $2.4 million to $3.4 million estimate.