This is great, and I'm so tickled for John! I have his book, the "Photoatlas of Inclusions in Gemstones", which was the most expensive book I own, and I'm delighted to see a new mineral named after him. From AGTA, here's the scoop and what you should know about it.

Johnkoivulaite, discovered in Myanmar, is a member of the beryl family

"CARLSBAD, Calif. – Sept. 17, 2019 – GIA (Gemological Institute of America) researchers, in collaboration with scientists from the California Institute of Technology, recently confirmed a new mineral species, johnkoivulaite, named in honor of the renowned microscopist and GIA researcher John Koivula. The 1.16 ct crystal – accepted by the International Mineralogical Association as a new mineral species – was found in the Mogok Valley of Myanmar by local gemologist Nay Myo. GIA Senior Research Scientist Aaron Palke will present the newly-named mineral at the Geological Society of America (GSA) conference on Sept. 25 in Phoenix, Arizona. 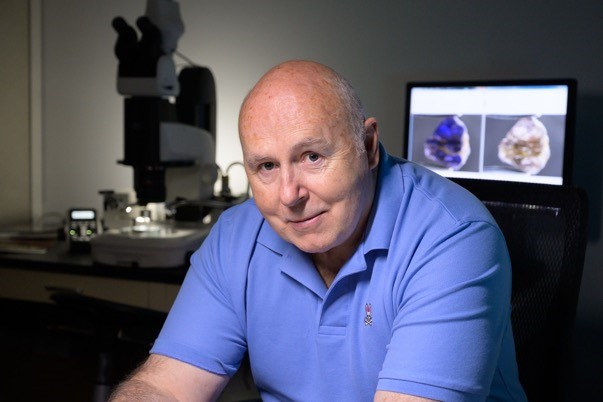 The new mineral johnkoivulaite is named after renowned gemologist John Koivula, best known for his contributions to inclusion research and photomicrography. Photo by Kevin Schumacher/GIA.

“We are privileged to be able to name this mineral after John Koivula who has contributed so much to science and the gem and jewelry industry as a prominent gemologist and innovator in photomicrography,” said Tom Moses, executive vice president and chief laboratory and research officer. “Discoveries such as this remind us of the importance of our mission-based research and of the numerous important contributions John has made in his more than four decades of scientific work.”

Johnkoivulaite has a hexagonal crystal structure that is very similar to beryl and other members of the beryl group, such as pezzottaite. Standard gemological testing gave an RI of 1.608, with a birefringence too small to accurately measure, an SG of 3.01, a hardness of 7½, a conchoidal fracture, vitreous luster, and no reaction to long-wave or short-wave UV. This mineral is especially unique due to ..."
https://agta.org/new-mineral-named-for- ... n-koivula/
PinkDiamond
ISG Registered Gemologist

No, no, no, no - a thousand times NO. Not that I have any problem with a mineral being named after John (that is great news), but does it have to be a BERYL? Just when you think you're zeroing in on completing a collection, they throw us another hard-to-get (and likely super-expensive) new beryl.
r2d

surplus odds and ends that I have on ebid.net
· Xtra gemstones
· Xcess fossils, minerals and rough
· Everything else
Top
Post Reply
2 posts • Page 1 of 1