Ask anything about getting started with opals and gemstones here 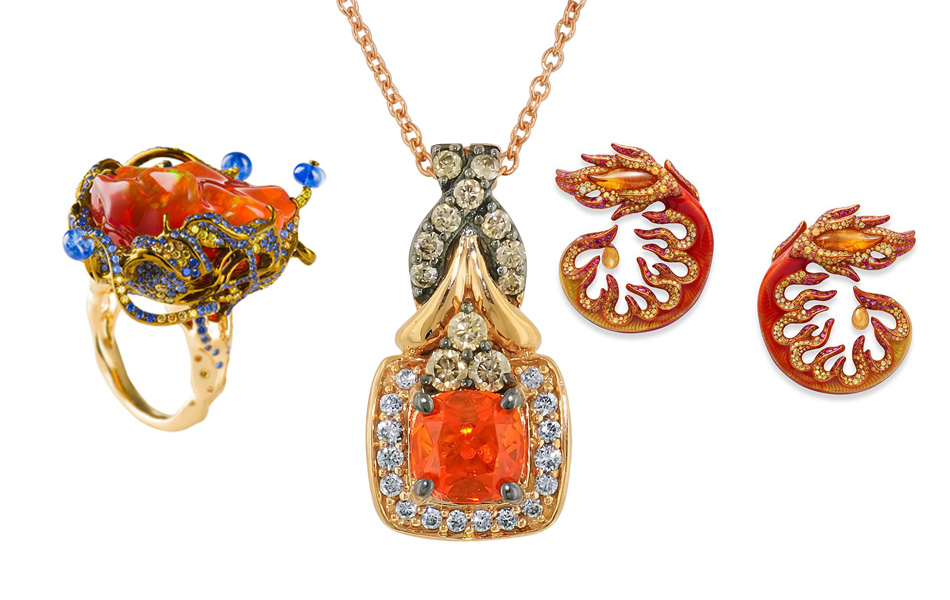 Opal is famous for the incredible array of colours displayed, from vibrant reds – the most prized – to velvety purples and everything in between.

This is caused by a unique optical phenomenon known as play-of-colour. With such incredible opal specimens here in our backyard, international varieties are often lesser known and less available.
Fire opal rarely displays play-of-colour, yet it attracts collectors based on the body-colour of the stone itself – a primary distinction from the better-known types of opal. Opals with play-of-colour are termed precious opal, whereas those without are called common opal. Although fire opal may be either, the presence of play-of-colour commands a higher price.
Fire opal is the transparent to translucent variety of opal with a yellow, orange, or even ruby red body-colour, also known as ‘Mexican opal’ – derived from the hue and the most well-known locality of this material.

The regions of Querétaro and Jalisco in Mexico are major producers of fire opal, though other regions include Michoacán, as well as Bemia in Madagascar, Kazakhstan, Turkey, Ethiopia, Java in Indonesia, and the US state of Oregon. The opal localities of Mexico were discovered accidentally by labourers around 1835. Organised mining efforts commenced circa 1870, although it is believed these deposits may have been known to the Mayan and Aztec people who used fire opal in art and ritualistic ceremonies, significantly extending the history of these gemstones.

The vibrant hues are owed to the presence of particularly minute inclusions, coloured by iron. Given that play-of-colour is less prevalent, and these fire opals are admired for their body-colour, they are often faceted rather than just fashioned into the cabochon or freeform shapes commonly seen in other types of opal. Opal is often classified according to its geological setting, such as the sedimentary context for Queensland boulder opal.
Unlike boulder opal, fire opal is volcanic with some degree of crystallinity – i.e., some order to its structure. Generally, this variety can be up to 66 million years old.


Despite differences in appearance, fire opal is still hydrated silica – the same material as other opal – and so it must be treated delicately.
More on cleaning here: https://www.jewellermagazine.com/Articl ... -Fire-opal