The Real Gemology of Ethiopian Opals in ‘Uncut Gems’

For those of you who've been involved with opals and gemstones for many years, here you can chat with your peers.

The Real Gemology of Ethiopian Opals in ‘Uncut Gems’

Here's a good one from GIA on opals, and the movie Uncut Gems, which I have avoided posting here because every other article had clips of the movie, and the foul language is not something you want to be playing at work if you were to view it there, much less if children are present. Sandler's mouth is an open cesspool in this one, which is why I wouldn't sit through it after hearing just what I did in one clip I couldn't even sit through. Every other word was an 'F' bomb, and they're trying to pass off Welo opal as the finest in the world. Obviously this is Hollyweird, not reality.

This article doesn't have that so it's safe. Enjoy! 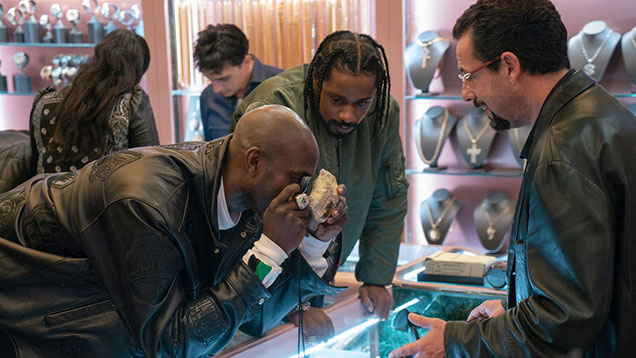 NBA star Kevin Garnett, left, plays himself in "Uncut Gems," by Josh and Benny Safdie, along with Lakeith Stanfield, center, and Adam Sandler. They are looking at an Ethiopian opal in matrix that Sandler's character, Howard Ratner, is putting up for auction in the movie. Photo courtesy of A24 Films

"The magical quality of opals is the central metaphor of the 2019 movie “Uncut Gems,” starring Adam Sandler. A giant piece of Ethiopian opal, still in its matrix, is smuggled to New York.

“They say you can see the whole universe in opal, that’s how … old they are,” Sandler’s character, Howard Ratner, a jeweler and gem dealer on 47th Street in New York City, tells basketball star Keven Garnett when he shows the opal to him. Garnett is captivated to such an extent that he cannot play well without owning it.

Ethiopian opal ‒ the featured gemstone in the movie “Uncut Gems” ‒ was first discovered in Ethtiopia in 1994. Photo by Eric Welch/GIA

With opals, as with most gemstones, the final polished stones weigh only a fraction of their rough form. The specimen shown in the movie appears to have several opal nodules (though probably not black opal) inside the matrix of host rock, but that host rock appears to account for the majority of its volume. This means that it would be very difficult – in real life – to evaluate the opal and appraise its value until the matrix was removed.

“In real life, the opal nodules must be shaped and polished into gems after removing the valueless matrix, which often results in much more weight loss,” explained Nathan Renfro, GIA Graduate Gemologist® and manager of colored stone identification services at GIA. “Any realistic valuation of rough gem material is based on the potential for yielding polished gems and the risk involved in fashioning finished gemstones.”

Adding to that risk is the fact that, unlike most gems, opals are not stones or minerals.

Opals are formed from centuries upon centuries of seasonal rains that leach microscopic silica particles from sandstone, carrying them deep into underground fissures and cavities. As the deposited materials dry, the microscopic silica spheres become compressed into a closely-packed lattice. As light travels through this microstructure, it creates a dazzling kaleidoscope of flashing rainbow colors, called play-of-color.

The opal that beguiles the main characters in “Uncut Gems” was still in its matrix, similar to this piece of rough opal in matrix. Photo by Robert Weldon/GIA

The Many Colors and Types of Opal

Re: The Real Gemology of Ethiopian Opals in ‘Uncut Gems’

You can tell non-rock people.

“In real-life, this ‘uncut gem’ is made from a large piece of matrix, which is the host rock that opal grows in, with genuine chunks of black, grey and white Australian opal stuck in it.” – Jewellery Advisor Julia Griffith."
https://www.hitc.com/en-gb/2020/05/25/m ... lly-worth/

Sebastian Bear-McClard, who worked with the film’s directors the Safdies brothers, told the Hollywood Reporter that they did initially attempt to source a real black opal.
However, after the principal photography was underway, he researched iconic opals and collaborated with the production’s art department in order to give the gem that perfect look.
Interestingly, a new source of black opals in Ethiopia (where the films ‘Uncut Gem’ was mined) was discovered in 2012 – the same year as the movie takes place.

In the long run this movie was a "bad" association on opal in the plot. Ya think they could even get a real opal. A few kilos of good E would not break the budget when you can resell it when filming is over & not work the opalholism angle so much. I do think opal is the most mesmerizing of the Gems & it does deserve the title of The Thieves Stone. Im not sure which rendition it would be under - desired target, can "afford" to wear them maybe even using the novelty as a distraction to slip away for a bit. I tell diggers they need to keep their gems close as way too many evaporate over the next years.

I would have gotten more great flash & honeycomb to make it look like it was nipped a lot in like 50 places? Large flat chips embedded in an Ethiopian looking white for contrast matrix with the chips backs painted dead black before creating it. Then do a slow close up of around it a few times when the stars are falling in love with it. My theater arts stagecraft from college is showing I think.
I'll jump over my shadow...to www.virginvalleyopal.com
Top
Post Reply
2 posts • Page 1 of 1